Monastery of Saint John the Theologian 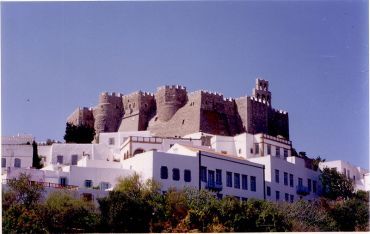 Monastery of St. John the Divine is located on the northernmost island of the Greek Dodecanese - Patmos. Legend has it that in '95 Emperor Domitian to the island of Patmos was exiled St. John the Evangelist. In this mountainous terrain in one of the caves, he received a revelation, written by his disciple.

The monastery appeared much later - in 1088 through the efforts of the Reverend Christodoulos. It was erected on a hill on the ruins of the Temple of Artemis. Monastery of St. John the Evangelist was built as a fortress with towers and bastions to protect the island from the frequent pirate raids.

Today the monastery St. John the Evangelist is the current men's Orthodox church, which is under the jurisdiction of the Patriarch of Constantinople.

You can visit the huge library, which collected many of the liturgical books and sacred scriptures. Nearby is the Cave of the Apocalypse, in which the Apostle received a revelation.

In the port of Patmos to the monastery of St. John the Evangelist can be reached by ferry from the island of Piraeus and other islands of the Dodecanese archipelago.