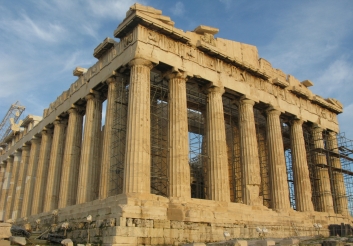 Parthenon - the greatest monument of ancient Greek art. The temple stands majestically on a hill of the Acropolis in central Athens. This monumental building is dedicated to the patroness of the city to the goddess of wisdom and war, Athena Parthenos.

The temple was built during the reign of Pericles. All the people of ancient Greece was involved in its construction: in Athens from all over Greece brought gold, white marble, ivory, ebony, brass, cypress. Pericles this masterpiece would not only commemorate the victory of the Greeks over the Persians, but also show the main rival of Athens - Sparta superiority of a democratic state. Architects and Iktin Callicrates designed the Parthenon on the rules of the golden ratio. According to ancient canons architecture, on the longitudinal side of the temple of the column than at the end face. The architects took into account that the distance straight lines are seen as a bit concave. Ancient Greek architects used a series of simple steps - tapered columns of the temple to the top and slightly inclined angle of the column to the center. In this way they have ensured that the Parthenon looks perfect harmony.

Parthenon interior was divided into 2 parts. In the western part of the Parthenon of Athens kept coffers. In the eastern part of the temple was spacious with a 11-meter statue of Athena Parthenos, made ​​of ivory and gold. Statue existed for more than 900 years, but to this day has not been preserved.

At various times, the Parthenon functioned as a Christian church, a Catholic church, a mosque, the fortress, the treasury. Today, this masterpiece of Greek art attracts many tourists from around the world. The temple is surrounded by majestic colonnade, some parts are decorated with bas-reliefs, which shows the heroes of myths of ancient Greece and the real historical characters: Amazons, centaurs, giants, heroes and rulers. The frieze of the Parthenon can see a picture of a solemn procession Panathenaea.

You will see a panel with high relief, which previously housed the colonnade. Attracted the attention of relief surrounding the cella, and the two groups of statues standing at ease. Bas-reliefs depicting scenes of competitions giants and gods, centaurs, Amazons and Greeks, the Trojan warriors battle. One of the famous sculptured friezes and sculptures, many of the great ancient Greek sculpture Phidias today are in the British Museum, the other fragments are exhibited at the New Museum of the Acropolis.

Parthenon - the greatest masterpiece of world art. For the past two and a half thousand years amazes the audience with his majesty, grace and incredible proportions. A lot of tourists come to Athens to see this symbol of Greece.