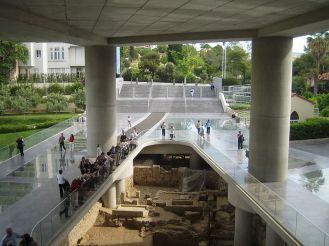 New Acropolis Museum was opened in June 2009. Its creator was the Swiss architect Bernard Tschumi, who designed the present highly functional architectural masterpiece.

Started new museum associated with the return to Greece of the marbles, once Lord Elgin removed from Greece to the UK. The New Museum presents sculptures, part of the relief, and other artifacts that have been found by archaeologists during excavations of the Acropolis.

The New Acropolis Museum has several permanent exhibitions. This archaeological site slopes of the Acropolis, the Parthenon hall, hall of the temple of Artemis, and other facilities, representing the classic Acropolis, Hellenistic and Roman periods of time. Here you can see the engraving of the Parthenon, the Temple of the few statues of the goddess Athena and the original caryatids from the Temple of Erechtheus.

The New Acropolis Museum is located in the old district of Athens - Plaka. It is located 280 meters from the Parthenon. The main entrance to the museum - Dionysius the Areopagite on the street near the exit of the subway station, stop "Acropolis", the second line.