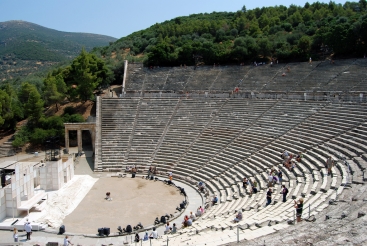 Epidaurus Theatre - one of the few ancient Greek structures that best preserved. The theater was built in 3-4 century BC and is still in force. Every year in July there put modern performances within the Athens Summer Festival.

Diameter at Epidaurus theater scene is 20 meters. Theatre seats approximately 14,000 spectators. Its uniqueness is not only in excellent acoustics. Theatre - it is also a great therapy. Ancient Greeks believed that the theater had a beneficial effect on mental and physical condition of the person.

Theatre at Epidaurus was open only in the late 19th century during archaeological excavations. And in 1939, was staged the tragedy of Sophocles' Electra. " Since then, every summer there are representations.