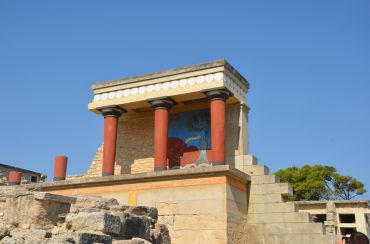 On the north coast of the island of Crete is the ancient city - Knossos. He was an important center of one of the greatest civilizations - Minoan, which dates back to prehistoric times. These top-dawn Minoan civilization reached in 1500 BC. And one of the clearest evidence of this is the Palace of Knossos, where according to legend, once home to King Minos and his daughter Ariadne. Palace demonstrates the artistic, architectural and engineering prowess Minoans.

Palace of Knossos - the largest of all the palaces built Minoans. On an area of 130 by 180 meters there are thousands of halls and rooms, each of them - the appointment.

Research and Restoration of the palace has devoted much of his life explorer Sir Arthur Evans. The history of this unique palace scientists split into two phases. The first of these relates to the 2000-1700 years BC. Having existed since the construction of three years, the palace was destroyed by an earthquake. It was then thrust the Minoans built a new palace. It is only necessary to imagine that the present is the palace of Knossos in 1700 BC!

Today, this unique monument of architecture of ancient Greece attracts tourists from all over the world. The Palace of Knossos is a huge structure, which consists of a set of corridors, stairways, storage rooms, baths. At first, it seems that all these premises randomly grouped around a rectangular courtyard. But gradually, your gaze is the harmony of the whole ensemble. The palace walls were decorated with frescoes, some of which can be seen today. The frescoes depict slender young men who play sports. Cheerful little girl jumping over a bull. Skillfully made ​​pieces and parts admire today. Pedpolagayut that took place in the palace once lush and colorful life. Proof of this are the numerous surviving fragments found among the ruins of the palace of Knossos. Hundreds of rooms and luxury rooms designed for various receptions, some were the rests not only for the king and queen, but also for the servants, ladies, gardeners and slaves. There were workshops where craftsmen worked the king. Discovery of massive storage, theater. Pay attention to the column. Red columns alternate with black, which extend to the top and narrow at the bottom, forming a light tunnel. Columns lit chambers and provide natural ventilation of the palace. They directed air flow required for placing temperature coming from the external colonnade.

Also of interest is a luxurious throne room in the west wing. Now here is a gypsum throne with images of griffins - mythical creature with the head and wings of an eagle and a lion's body.

Crete is famous for its legends of the Knossos palace, known as the labyrinth of the Minotaur. Believe that it is in this palace once lived a terrible monster with a human body and a bull's head. It devoured the people and imposed a wild fear in the population. According to the myth, Theseus slew the monster, and with the help of Ariadne's thread was able to get out of the maze. Tourists today can be seen on the walls of the palace Arcanum labros meaning "Labyrinth."