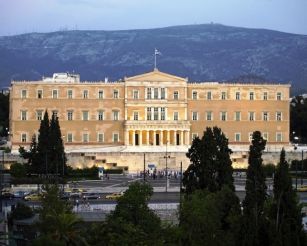 The main square of the capital of Greece is Syntagma or Constitution Square. It was named in honor of the Constitution, proposed in 1843 by the Bavarian King Otto of Greece.

Syntagma Square is located in front of the palace of the Hellenic Parliament, who previously served as the residence of the Greek kings. From the majestic buildings of the 19th century marble staircase leads directly to the central element of area - large fountain. Furthermore Syntagma are Neapolitan statues that were donated to Athens in the 19th century the official representative of King Otto Lord Bute. There is also a cenotaph, before which every hour is a change of the guard of honor in suits evzonov. A changing of the guard over the holidays comes with musical accompaniment ensemble.

Syntagma Square includes two green areas, so walking through Athens in the afternoon, you can rest here in the shade gardens.

Syntagma Square is one of the most important hubs of the city. Here you can get on the subway, leaving the station "Syntagma" or on the bus, if you drive from the international airport of Athens.