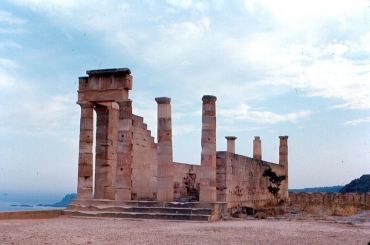 The picturesque town of Lindos is located on one of the most beautiful Greek islands - Rhodes. Besides cozy coves and quiet streets of white stone, Lindos is also one of the most important archaeological sites - the Acropolis.

The Acropolis of Lindos is the second largest Greek burial after the Athenian Acropolis. The Acropolis of Rhodes is situated on a hill at an altitude of 116 meters above sea level. With its summit offers spectacular views of Lindos and its beautiful harbor. In addition, the impressive ruins and the ancient city. In addition to the fortress walls that surround the area of the acropolis, there remain a few columns - the remains of the Temple of Athena Linda. It was built in the 4th century BC, but it remains even today look impressive. At the entrance to the Acropolis of Lindos can see the bas-relief - carved into the rock of an ancient Greek warship.

The Acropolis of Lindos is located on a hill and to reach there, will have to overcome the hundreds of steps. Because the most convenient form of transportation is a taxi in Lindos - riding on a rented mule locals.