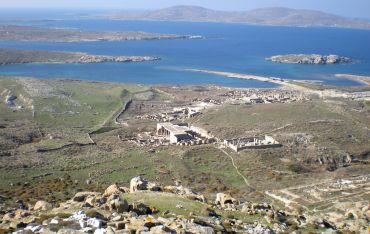 Delos - a Greek island, one of the largest open-air museums. Delos has retained many traces of different ancient civilizations that existed off the coast of the Aegean world, from the third millennium before the early Christian period.

According to the Greek mythical legend of Delos became a haven for the beloved of Zeus and Leto Titanides birthplace of the gods Apollo and Artemis.

Delos, numerous monuments and elements of temples dedicated to the gods. For example, the ruins of the Temple of Hera, the mosaic on the floor of the house of Dionysus Doric temple of Isis, and the ruins of temples in honor of the gods Serapis and Anubis. Here you can see the terrace of nine marble lions statue of Dionysus, the Minoan Fountain, temple ruins dolphins and partially preserved market square.

Since 1990, the museum island of Delos was listed as a UNESCO World Heritage Site. To him the easiest to get on the boats or pleasure boats that regularly ply daily from the port of Mykonos.