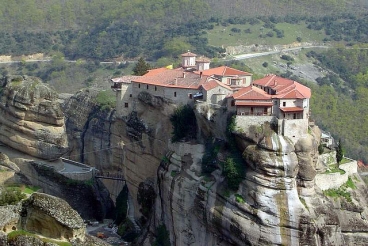 Meteora monastery complex is located in the mountains of Thessaly, in northern Greece.
On these mountains in the 10th century monastic center was formed, which still exists today. Survived only six monasteries, and there used to be 24 monasteries. They were on the tops of the rocks, reaching over 600 meters in height.

Meteora is one kilometer away from the ancient town of Kalambaka. This city daily buses to the monasteries. By the very monastery complex will need to get up the steps carved into the rocks and hanging bridges.
All buildings of the monastery complex are open to the public from 9:00 to 13:00 and 15:00 to 17:00, every day in the summer, but in winter in some monasteries were closed on weekdays.